With the end of World War II the men and women of The Arc of Washington State (then called the Children’s Benevolent League) no longer had to delay meeting their biggest challenge – public ignorance about persons with intellectual disabilities. Most people never even thought about them.  There were no special education programs for such children. None of the public met adults with intellectual disabilities in supported employment or housing.  In fact, the only answer the public knew was to send them away to isolated and unknown institutions. Beyond that, they were in the closet, in the shadows, forgotten.  But these parents could not forget their children.

On October 21, 1935, James F. Oakley of Seattle organizes a meeting of “Parents, relatives and others interested in the 1,500 mentally deficient children at Medical Lake School.” The purpose of the meeting is to form an organization that would send “toys, books and other little gifts to children” as well as provide parent peer support. On December 9, 1935, Ada Percival of Tacoma chairs a similar meeting for the same purpose.  Within just a few months, they joined forces with parents in eastern and central Washington, and the birth of our country’s first grassroots parent organization dedicated to children and adults with developmental disabilities was formed.

The Tacoma group chooses the name Children’s Benevolent League (CBL) and the state organization adopts it as well. Within a few short months, the CBL is well on its way to shaping the history of grassroots advocacy in the field of mental retardation, and preceding the national association by 15 years. On April 15, 1936, the Articles of Incorporation are signed in Tacoma by six representatives of Seattle and Tacoma families. Although the activities of the organization revolve around a system of institutionalized care, the mission and philosophy of the CBL are grounded in ideals that remain unchanged: increased public awareness and quality of life for their members’ sons and daughters.

The ink on the Articles of Incorporation is barely dry by the time the CBL announces its goal to build a second state school on the west side of the mountains, closer to families. On June 27, 1936, delegates from Seattle, Tacoma, Spokane, Colfax, Walla Walla, Yakima, Aberdeen, Wenatchee and Bellingham meet at the first state convention of the CBL and vote to adopt objectives. Legislative advocacy becomes the means to achieving their goals. The CBL’s president, Monty Percival, goes one step further: he runs for the state senate…and wins. Parent advocates not only have a friend on the inside, but that friend—one of their own founding members—is appointed chairman of the State Charitable Institutions Committee.

The 1950’s begin with a surge in the League’s publicity campaign to create a positive public image of children diagnosed with mental retardation. This included the creation of a video “Children Limited”. In 1952, the Children’s Benevolent League becomes the Washington Association for Retarded Children.  Washington stays the course toward institutional expansion, but it’s a painful choice for many parents. A growing movement to keep children with disabilities at home creates a push toward public education. As a result, the CBL (later, WARC) leads the nation in fighting for education for students with intellectual disabilities at the same time that its success in institutional advocacy continues to grow.

In 1957, Senate Bill 122 is introduced and supported by WARC to increase parents’ control over institutional admissions and creates an admissions procedure that promotes the concept of institutions as schools. In 1959, SB 335 passes, which establishes the right of institutional parents to designate a “parental successor” to protect the individual’s rights upon the death of the parent. It also provides a foundation for Eric Froberg to launch a winning defense against deinstitutionalization in later years when the ARC (formerly WARC) sues to close the institutions.

Although the 1960’s witness the greatest growth in institutionalization, WARC is heavily involved in pursuing a comprehensive system of services “from cradle to grave” in the community. Education and vocational services, as well as the beginning signs of community residential alternatives emerge alongside the explosion of institutional placements, which rise to an all time high of 4,197 residents by 1968. The organization is caught in the wave of an overwhelming pressure to address the waiting list, a pressure that’s relieved by institutional growth. Simultaneously, WARC leaders are deeply involved in the creation of services that are closer to families’ homes.

A decade after the release of the “Children Limited” film, The Arc of Washington State produced a second film, “Game of the Year” (1960). The difference between the two movies dramatically illustrates The Arc’s success in bringing the issue of persons with intellectual disabilities before the public. This movie shows Governor Albert Rosellini riding in a convertible, waving to the people celebrating the fourth annual “Game of the Year”. Members of each basketball team, men from Lakeland Village and Rainier School (two institutions located in Washington State) also rode in the parade.

Not everyone is pleased with institutions as the only option. What began in the 50’s with a push for public education continues to build in the 60’s with legislative interest in alternative community-based services. In 1961, Representative Kathryn “Kay” Epton, a parent from Spokane, leads the creation of community developmental centers through the Epton Center Act. Epton is an outspoken critic of institutions and one of few who supported parent pay, but only for those who placed their children in state schools.

As local chapters solidify their roles as service providers, and the state chapter steers funding and state policy toward integration and community-based services, activism drops off. Parents who had placed their sons and daughters in institutions began to gravitate toward groups formed by parents at each of the institutions in the 60’s. In the 70’s, the majority of WARC members are parents whose children live at home with them—representing a meaningful shift in membership. WARC parents continue to want their sons and daughters to live closer to home. Only now, instead of more institutions, they want a more normal life for their loved ones.

In 1974, WARC chooses to alter its name by changing “Children” to “Citizens.” The term citizen indicates a shift in thinking and advocacy from childlike “needs” to individual “rights.” The ideology of normalization (a term coined by Wolf Wolfensberger) promotes the values of mainstreaming, least restrictive environments and . In 1975, the legislature authorizes a plan for deinstitutionalization. For institutional parents, it goes too far. For community advocates of WARC, it doesn’t go far enough. 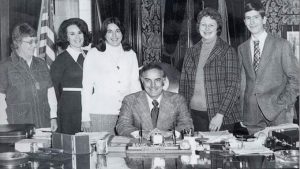 Frustrated that deinstitutionalization had not only slowed down, but had started to reverse course, the board votes to sue the state on grounds that institutionalized persons are being deprived of their civil liberties. In 1971, a small but fierce group calling itself the Education for All Committee—Evelyn Chapman, Katie Dolan, Janet Taggart, Cecile Lindquist—worked with two law students, George Breck and Bill Dussault, to craft legislation that would mandate public education for all children with disabilities age 3-21. They descended on the state legislature with a mission to pass a law with teeth. And, with backing from WARC’s vigorous grassroots network, the bill was signed into law that same year.

ARC also sets its sights on more natural living situations, advocating for community residential services within a person’s home. Although the philosophical argument against segregation fails at the legislative level, the institutional system is dealt a blow by federal regulators who decertify five of the state’s six DD institutions. Rather than pour funding into the institutions, the state responds to federal findings by moving more than 700 individuals into community residential services. In addition to privately contracted residential providers, a handful of state-run community alternatives are created, called State Operated Living Alternatives (SOLAs).

Together with King County Parent Coalition Coordinator, Margaret-Lee Thompson, Janet Adams and Sue Elliott from The Arc build a solid network of parent advocacy that becomes known as one of the most respected grassroots advocacy efforts “on the hill.”The Arc deploys a team of legislative advocates who ensure that there’s a presence on the hill every day of session, attending hearings, meeting with legislators and mounting statewide actions through telephone trees and, later, fax alerts. Local Arcs send representatives throughout session in what is becoming a well-oiled advocacy movement.

By the late 1990’s, The Arc puts its resources toward strengthening self-advocacy in the legislative arena. For the first time in Washington State history, people with developmental disabilities are beginning to form a political force. A major source of this presence comes from People First chapters supported by local Arcs. From the 1990’s to now, The Arc has been instrumental in grassroots advocacy at the policy level, including with self-advocates. When Self Advocates in Leadership, a coalition supported through a grant from the Developmental Disabilities Council, has its first bill introduced and passed in 2004—The Respectful Language Act—the state is put on notice: People with developmental  disabilities demand respect. It is the first bill of its kind in the country.

For thirty years, The Arc of Washington State collected used clothing and had a contract to sell it to an outlet that served Value Village stores. With the onset of the Coronavirus 2019 (COVID-19) things changed quickly. Many businesses, including thrift stores, were required to close and had to decide whether to close permanently or reorganize their way of doing business. Unfortunately, when contracts were canceled, The Arc could no longer continue this fundraising arm of our organization and had to shut down our clothing donation collecting.

The Arc of Washington State (no longer an acronym) and its grassroots advocacy of parents, self-advocates and others continues to be a force to be reckoned with legislative accomplishments. The two ongoing issues that elude an answer is the continually growing waiting list, known as the No Paid Services Caseload, and the workforce issue in finding individuals to work in this field.

The year 2020 has brought about many changes. The COVID-19 pandemic made harmful economic changes including the loss of our clothing donation business. The state was abiding by the Governor’s order to stay at home to try to “flatten the curve” and slow or stop the spread of the virus. This was very difficult for people with I/DD especially, as many lived alone and did not understand why they could not go out to their usual activities.

A bright spot in 2020 though, was the passing of the torch for The Arc of Washington. The Executive Director, Sue Elliott, who had done an awesome job of building The Arc from an organization with only one employee to a thriving non-profit and thirty some employees, decided it was time to retire. Her leadership and knowledge inspired many who chose to work in the I/DD field. Stacy Dym was chosen as the new Executive Director for The Arc of Washington State and transitioned into the position at a very difficult time, in the middle of the pandemic. Stacy came from The Arc of King County, and as their Director not only ran the non-profit organization, but also a supported living program. She came into the new job and stepped up from the first day. Though in the middle of time of crisis for our state, Stacy has many new ideas and is determined to see The Arc thrive as we head into the future.

Join us by becoming a member, providing a one-time or monthly gift and support us we strive to be an even stronger organization that advocates for the rights and full participation in society of all people with I/DD. Help us move forward as we envision a world where people with I/DD are included in their communities and neighborhoods and where quality supports and services respond to their needs and personal choices. Join self-advocates, parents, siblings, caregivers and other allies and friends all working together to create a more inclusive community for children and adults with I/DD and their families.

We are Passionate because it’s Personal!

The Arc of Washington State

JOIN US IN HELPING OTHERS!

GIVE A GIFT TODAY